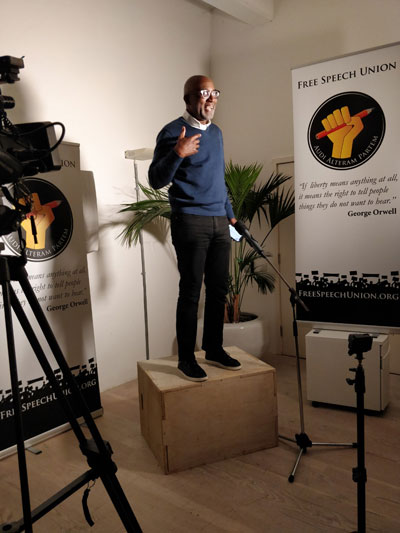 We shouldn’t need to keep repeating it, but In a free society, everyone should be able to express their lawful right to free speech without fear of punishment. As George Orwell said, “If liberty means anything at all, it means the right to tell people things they do not want to hear.”

Since the launch, the FSU has attracted a lot of publicity, most of it favourable. You can see some of it here. Inevitably, we’ve also attracted some hostile press, mainly in the Guardian, such as the claim that the FSU is a “grift” because we charge membership dues. That’s an odd criticism, but we’ve included a page on our website explaining what we think our income will be in our first year and what we’ll spend it on. We’ve spent nothing so far, beyond a few expenses, and won’t until a budget has been approved at our first board meeting later this month.

To date, almost 2,500 people have signed up as members, which shows how much an organisation like the FSU is needed. Not that anyone should be in any doubt about that. In addition to today’s attempt to ex-communicate Trevor Phillips, last week saw two major no-platforming incidents at Oxford University.

The first occurred on Saturday, 1st March when Selina Todd, Oxford Professor of Modern History, was no-platformed at an event at Exeter College to commemorate the 50th anniversary of the first women’s liberation conference at Oxford. Professor Todd was told the night before that her invitation to speak was being withdrawn because some of the other speakers had threatened to boycott the event if her speech went ahead. The issue, as it so often is when it comes to the no-platforming of feminists, is that Professor Todd is “gender critical”, i.e. sceptical about treating transwomen as if they’re indistinguishable from women.

This is a particularly egregious case because Professor Todd had warned the organisers that some of the other participants might threaten to withdraw if she was involved when she was first approached by them last October. But they assured her they wanted to hear from a range of different voices within the women’s movement. It was with this understanding in place that she then helped the organisers pull the event together. Having invited Professor Todd, and assured her they would defend her right to speak, the organisers should have told those participants threatening to boycott that they refused to be bullied. Instead, they gave in to their demands and no-platformed one of their most energetic supporters. At that point Exeter College, which proclaims its commitment to free speech on its website, should have pulled the plug on the event instead of letting it go ahead. I have made a formal complaint about this to the Rector (head) of Exeter on behalf of the FSU that you can read here. He has acknowledged it and told me it will be investigated under the College’s official complaints procedure.

The Second no-platforming incident occurred on Thursday, 5th March when Amber Rudd, the ex-Conservative MP and former Home Secretary, was no-platformed by the UNWomen’s Oxford UK Society. Ms Rudd was invited to speak at Christ Church in the run up to International Women’s Day. The event was due to take place at 7.30pm, but 30 minutes before Ms Rudd was due to appear she was told the event had been cancelled. At this point, she had already travelled to Oxford at her own expense. The Society issued a statement on its Facebook page apologizing “for all and any hurt caused to our members and other wom*n [sic] and non binary people in Oxford over this event”. I’ve made a formal complaint to the Oxford University Proctors’ Office on behalf of the FSU that you can read here. The Proctors’ Office has acknowledged it and told me the complaint will be assessed and, if necessary, investigated.

The issue in both cases is clear. While the organisers of the event at Exeter and the officers of the UNWomen Oxford UK Student Society are under no obligation to invite anyone to speak, once an invitation has been extended they are under an obligation not to withdraw it at the behest of other participants or students who don’t share the speaker’s political views. Doing so endangers freedom of speech at universities because it effectively gives groups of activists and protestors the power of veto over the expression of viewpoints they disagree with.

Oxford University has various policies in place to protect free speech, as do all Britain’s universities, but the problem is they are more honoured in the breach than the observance. According to a report in the Huffington Post, the government is going to bring forward a bill to ensure free speech is upheld at Britain’s universities – something the Education Secretary has been threatening to do – but there are already several such laws on the statute books. Another law won’t help if universities fail to enforce it, along with all the others. What’s needed is a body that’s willing to take universities to task if they fail to uphold the law on free speech, including taking them to court, and that’s a role I want the FSU to play.

We’ve been thinking about how the law can be changed to strengthen the protection of free speech, not just in universities but across society, and the short answer is not to pass more laws but to repeal those that impose speech restrictions. If we do that, we can rely on English common law to protect free speech. This argument will be fleshed out by James Allen, a constitutional law professor at the University of Queensland, in the first paper we’ve commissioned for the FSU’s research arm.

As you know, we’re hoping to put a legal insurance scheme in place to protect our members who find themselves in trouble for exercising their lawful right to free speech. But if you’re worried about being put through a disciplinary procedure at work because your beliefs are at odds with your employer’s you should consider joining the Workers of England Union. The WEU has won tens of thousands of pounds for members whose “philosophical beliefs” have been discriminated against. We have negotiated a discounted joining fee of £25 for members of the FSU which covers the first three months of your annual membership dues and, unlike most other unions, the WEU will go to bat for you as soon as you sign up. If you’d like to take advantage of this offer, you can join using this form, not forgetting to email them at admin@workersofengland.co.uk, letting them know you’re a member of the FSU.

I hope you don’t think I’m trying to pass the buck. If you’re involved in a fight to protect your right to free speech and we think you’ve got a strong case, we’ll do our best to assist you and we may help you crowdfund to pay your legal costs. But because we’re not a registered trade union our members cannot insist on being represented by us in workplace disputes with their employers. If you’re a member of the WEU, by contrast, which is a registered trade union, you can insist on having a WEU representative. I know of two academics represented by the WEU in disputes with their employers who are very happy with the support they’ve received. 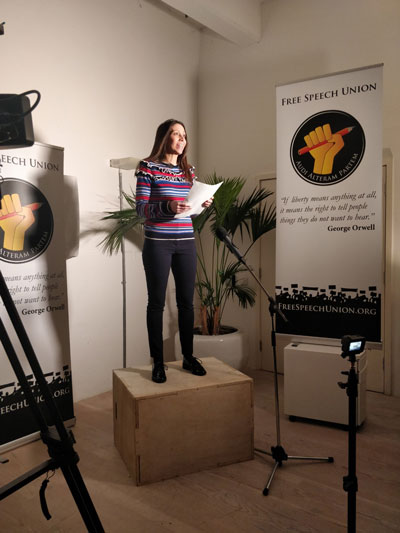 Incidentally, one of our members we do want to help is Kristie Higgs. Kristie is a pastoral care assistant who got into trouble when she wrote a post on Facebook criticizing the relationship and sex education programme being used at her son’s primary school. Even though she posted it in her private account, and even though she used her maiden name and not the name she was employed by, someone complained to the secondary school she worked at. As a result, Kristie was put through a six-hour disciplinary hearing, told her views made her a danger to vulnerable children, and then fired. You can see the speech Kristie made about this at our launch party here. Kristie is bringing a case against the school in the Employment Tribunal and Christian Concern is helping her. If you’d like to help them with the cost of helping her, you can donate here.

Finally, can I urge you to support Harry Miller? Harry is the ex-copper who took Humberside Police and the College of Policing to the High Court after he was investigated for liking and retweeting a humorous verse about transgendered people. He won a partial victory in that the judge ruled the police had acted unlawfully and compared them to the Gestapo. But the judge also ruled that the Hate Crime Official Guidance produced by the College of Policing, and which Humberside Police were following, was perfectly lawful. Indeed, he said it was fine for the police to record Harry’s twitter activity as a ‘non-crime hate incident’, even though there’s a risk that may show up on his record if a future employer applies for an enhanced DBS check. Harry and his legal team have been given permission to ask the Supreme Court to hear his appeal. If the Court grants permission, his case will proceed to a full appeal, but it will be expensive. You can donate to Harry’s crowdfunder here.

Thanks again for becoming a part of this new organisation. Together, we can make a difference.